Here in Japan, we are lucky to have seasonal access to fresh sardines, iwashi, and although the original recipe was written with them in mind, tinned sardines also work beautifully in this adaptation.

Iwashi with Herbed Breadcrumbs and Spinach

Why is the the recipe singed around the edges? It’s from a cookbook that partly survived a neighbor’s burning house. I found this page resting in a field nearby and rescued it, knowing it would have an appreciative audience here at TTFF.

Kristen McQuillin grew up munching tuna on crackers with her father and enjoying tuna melts at the fancy department store restaurant with her grandmothers. When her husband tried to introduce her to kippers and smoked oysters, she just about vomited. Fortunately tastes change and after two decades in Japan, Kristen now enjoys a wide range of conservas. Except oysters. 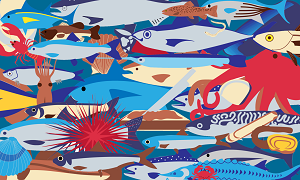